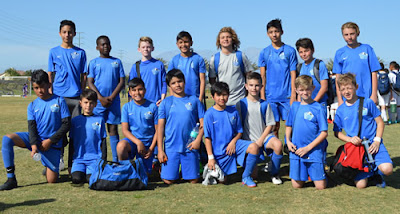 Ramona's Intra FC B2005 traveled to Norco this past weekend to take part in the 2018 State Cup. Cal South's flagship tournament celebrating its 40th anniversary.
The B2005s, coached by Drake and Gabriel Ocampo, had three tough match ups scheduled for the weekend.

Saturday saw the first of Intra's games against fellow San Diego side SD Force FC Academy. The match started off on an even keel with both sides creating chances. As the clock wore on Intra FC starting to take a hold of proceedings as SD Force began to struggle with Intra's pace and quick passing.

Intra's patience and pressing finally paid off when a long ball into the box was cleared by SD Force only as far as an Intra midfielder Felipe who managed to hook the ball backwards back into the danger area for the Intra striker Haidyn to nod in from close range.

The second half saw more of the same. Intra continued to harry and chase down the opposition playing a high intensity game. SD Force continued to probe but they were continuously caught out with Intra's smart use of the offside trap. Eventually the lead was doubled with a drive from outside the box by the Intra midfielder Jose. The keeper managed to get his finger tips to the ball but could not stop the ball as it rose into the roof of the net.

The rest of the game saw Intra comfortably hold off the competition continuing to play the ball around smartly to play the clock down. In the end Intra FC ran out comfortable 2-0 winners.

Game 2 pitted Intra FC against recent opponents Rebels SC. Having played the Rebels in a more recent competition Intra fell at that hurdle but this was an opportunity to exact revenge.

The match started with Intra having plenty of possession but not creating much in the way of scoring opportunities. They did, nonetheless, look fairly comfortable on the ball. Early kick offs, this one being 8am, have rarely served Intra well and this looked to be heading the same direction. On a rare foray forward Rebels managed to snatch the lead. It was soon 2-0 with yet another breakaway seeing Rebels comfortably dispatch their opportunity.

Initially rocked by the quick 2 goal blitz Intra managed to find their rhythm again by retaining possession and finding their man. The patience paid off when a shot was fired in which was initially saved by the Rebel's keeper but the Intra midfielder Diego was on hand to dispatch the rebound.
Buoyed by the fast response Intra set about putting further pressure on the Rebels with a combination of wing play and probing through balls. Persistence finally paid off as a Rebels attack broke down halfway inside the Intra half. The ball broke to the Intra midfield Isaac to dispatch the equalizer for Intra.

With the match poised at 2-2 there was everything to play for in the second half. A win for Intra would in all likelihood book a spot in the last 64. Intra kept up the tempo in the second half rarely giving the Rebels a chance to settle on the ball. Over all the second half was an even enough affair but the deadlock would eventually be broken. A patient Intra build up eventually worked its way to the forward Manny who drilled home from 18 yards.
Going behind saw Rebels mount attack after attack - the Intra defense and goalkeeper performed immense heroics to ensure the Rebels were shutout in the second half. Intra managed to see out the nervy last few minutes to secure their second win of the tournament.

Sunday's second match seen Intra up against Glendale FC. Soon after the first whistle it was clear to see that Glendale was a different class of opponent - looking comfortable on the ball and calmly moving the ball around the field. The attacked at will and if it wasn't for the Intra keeper it could have been a more damaging score line. That said Intra had their own moments. Glendale managed to snatch the lead from a breakaway but Intra hit back almost immediately.

Intra reverted back to their ground game. They worked the ball forward and got the ball to the striker and in a 50/50 the Intra striker was brought to the ground. The referee immediately pointed to the spot. The Intra midfield stepped up and sent the ball down the middle - the keeper held his nerve and didn't move saving the spot kick.

A match that was becoming more and more physical by the minute saw the more diminutive Intra side put it up to the Glendale side. The pressure eventually told on the Ramona side as the days earlier game started to take a toll. Another Glendale counter saw Intra struggle to get numbers back as the forward nipped in to make it 2.

Intra pushed hard to work their way back into the game. Playing a team that was clearly a bracket or two higher the Ramona club put a seriously good effort in. The chances were there and on a different day the ball would have bounced the right way.

Despite the defeat "Ramona's Club" made it out of the group stages to book a place in the Final 64 in Lancaster CA. Next up is Freedom Futbol, a side that were 100% in Norco scoring 17 goals in 3 games. Can Intra shut that down? We'll see. ForzaIntra!!!!

Posted by Ramona Soccer League at 9:14 AM